Discord is an application that is widely used by gamers. Gamers use this application to communicate with their friends during a game. Discord gives various other features due to which the gamers are attracted towards the application. One of the features of Discord is Screen Share.

Using the screen share feature, one can share the screen entirely or an application window to its friends and they can chill and watch something together. But certain times it is found that the audio is not working and the Discord screen share no audio issue occurs. Today, in this article, we are going to discuss the same problem and look at the points due to which this problem is caused and we will also try to look at some of the fixes that will help in resolving the issue.

What Are the Different Causes of the Occurrence of Discord Screen Share No Audio Problem?

Various reasons can cause this issue. The reason can vary from person to person and hence, we have collected all such situations that can cause such a problem. Following is the list of such issues that cause the discord screen to share no audio problem.

Let us proceed with the solutions. We may need to reset the application during the entire process so remember your login password and username. Also, check that the sound option is enabled properly and is turned ON. Following are various solutions that can fix the problem. 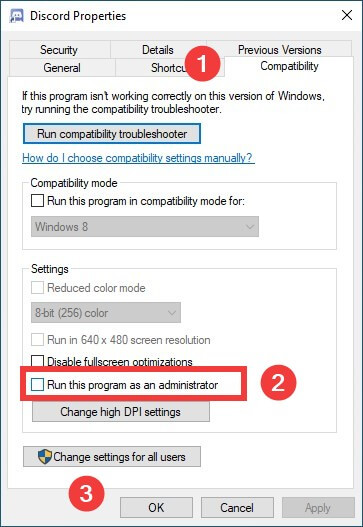 Start with pressing Windows + E. This will direct you towards the file explorer. Open the directory where the discord is installed on. Inside that directory, right-click on the executable file of Discord and select properties.

Click on apply to apply all the changes that you have made. Now, logout from your discord and log in again. Check if the problem persists while sharing the screen or the audio is now audible over the other side and the issue is resolved.

Push to Talk Feature of Discord

Discord has an option through which it detects the audio directly whenever any audio process takes place. It detects the audio and transmits it over the network. But with the screen share option released, there may be problems created with this. You can stop the auto-detection of Discord audio and then manually select a key from the keyboard.

Whenever you will select this key, then the audio transmission and detection activity will take place. Inside the application settings, there will be a tab of Voice and Video. Inside this option, check the box that says “Push to talk” and select the key of your choice. 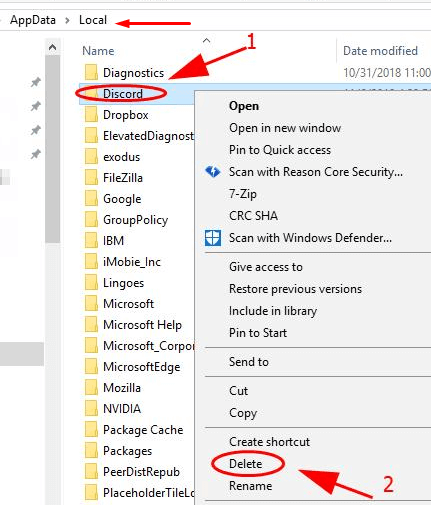 Discord, like other applications, use the discord cache memory and save the temporary data over it. If the cache memory is corrupted or faulted, an audio error can arise. To fix this, you need to exit the discord application to close all processes of discord using the task manager.

Clear the data of discord from the roaming data which is inside the AppData folder. Right-click on the Discord folder and delete it. This will delete all cache memory. Try re-installing the discord application and then see if the problem persists or the discord screen share audio not working issue has been resolved. 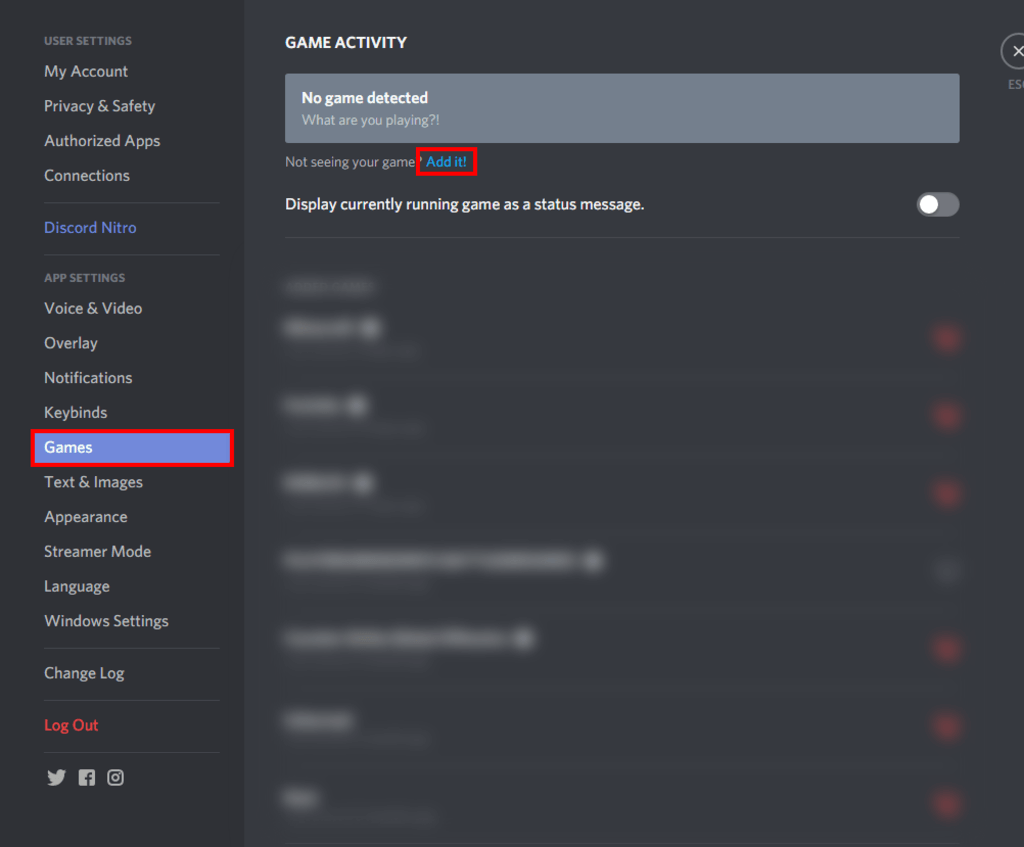 Usually, the detection of activity is done by the discord application itself. In some cases, the application detects the activity and applies respective functions. Sometimes, it may be possible that the application gets perplexed between the games that you are sharing and the applications. The issue is common and can be solved by following the steps mentioned below. Developers had released a feature using which you can select the application manually on which you want discord to focus.

Launch the discord application and go to the settings. Inside these settings, observe that there will be a section named games on the left side of the application. Inside this section, move towards the Game Activity and add the game or the application in which the audio issue arises. Do not run discord as an administrator while making these changes.

Also, check that any of the previously mentioned games are not running. If they are, close those games and remove them from the list and add back and see if the problem is resolved or the issue persists. If the audio persists, try running the overlay of discord and see if the discord screen share no sound issue is solved or not. If not, move on to the next solutions.

Sometimes, it may be possible that the application you want to share on discord may not be compatible with the screen share feature of discord. Firefox application (Mozilla Firefox) is one such application that gets bugged along with the discord application. This is just one example. There may be various other applications that can cause trouble. An application that uses multiple processes at a time can cause such a problem.

Discord takes the audio from the application and then processes it. Hence, certain applications do not work on them. You cannot do anything here except waiting for the applications to come up with a new update that is more stable and has fewer bugs and can run with these affected applications. 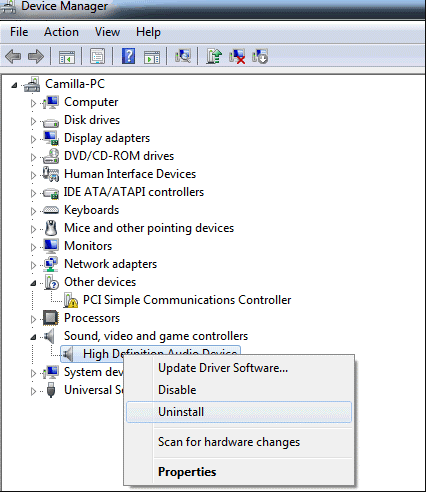 Audio drivers are one of the most important aspects that are used on a computer. Sometimes, it is seen that the discord application does not process the audio properly because the audio drivers are faulty or corrupted. If any driver is missing, you need to download it first.

Press the Windows button along with R to open up the Run Box. Here, type “devmgmt.msc” in the dialogue box. Hit Enter.

You will be inside the device manager window. Here, you need to right-click on the Audio inputs and outputs.

Right-click on the hardware sound device that is enabled in front of you and clicks on uninstall the device.

In the empty screen behind, click anywhere and search for hardware changes. This will scan for any recent changes made and if any audio drivers are not found, it will install them manually on their own.

After the complete procedure of installation, restart your computer as well as re-install the discord application. Now, login with your credentials and try the screen sharing function and see if the audio is now transmitted properly or not. In most cases, the solution is obtained here and the problem is resolved.

You can also go to the website manually and download the drivers from there. Just see the motherboard of your device is of which company and install the same company’s audio drivers. Certain third-party applications can help you to find the drivers that require update or installation. 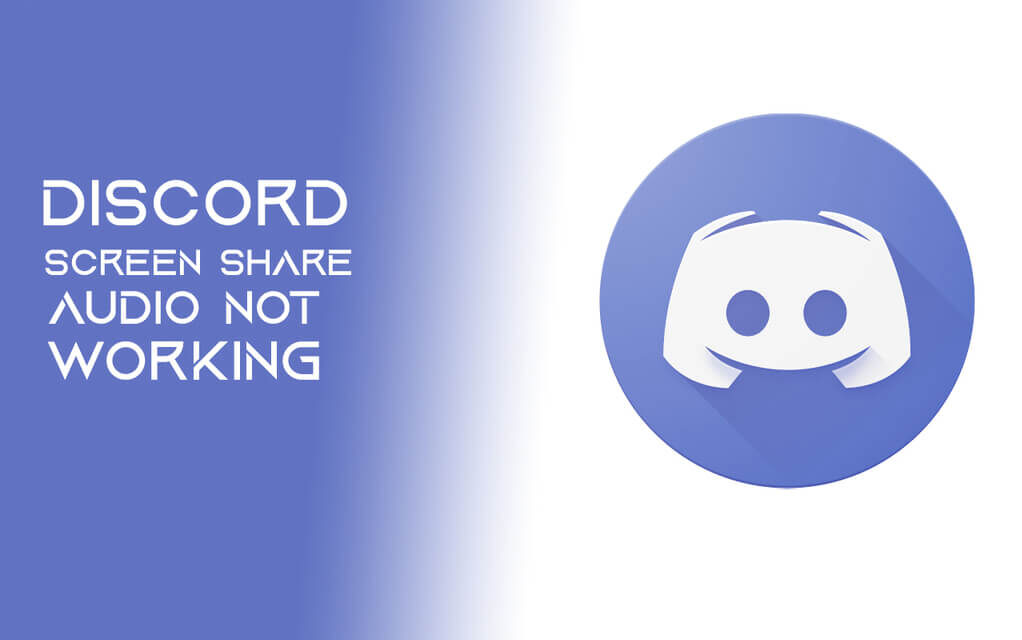 It is also noted that the application did not function properly at times whenever the game is being run in full screen. It, in some way or the other, interacts with the discord’s audio system and it does not permit the application in the transmission of the audio properly.

It is advised to use the application in minimized form. Restarting your computer is essential when performing this solution. Move into the gaming you wish to share and run the game in windowed mode for better performances over the discord application.

Check if the problem is resolved by minimizing the game into a windowed form or the problem persists. Generally, this solution solves the error in most cases but we cannot say about every computer as the solution varies from device to device.

This was all about discord screen share no audio problem. The problem can arise on any device and can cause trouble. The stable version hasn’t arrived yet and till then you can try the fixes we mentioned. Such fixes are general and can vary from computer to computer. We hope that the article has served its purpose and whenever you face such an issue, you can refer and solve it out!

Startup companies are much like flowers as they sprout out fast and grow quickly if...